A brief moment of sunshine!

At the fishing boats this A.M.
With the lakes full to bursting and the stormy weather continuing, the shelter of fishing boats offered the best birding locally. Once again I spent the most of the day there with DW and  the Joker.This morning the Auks were tooing and froing but this afternoon Guillemots in particular were pouring westwards out of the bay. The 1w Glaucous Gull paid us a visit this morning and a Great Northern Diver flew west, a flock of Knot and 4 Little Gulls were noted, Kittiwakes were much in evidence also a few Red-throated Divers and c100 Brent Geese moved east. Perhaps the most unusual bird was female Pochard heading west this afternoon.
Taken in the only moment of sunshine today!
Some of the 1,000s of Guillemots coming out of the bay past the fishing boats this P.M.
Posted by Ploddingbirder at 18:33 No comments: Links to this post

I have been without a mobile phone for 2 days now since it went for dip in the sea, I am ashamed to say that I feel almost bereft without it.
In better weather conditions today the sea was quite busy first thing with some Auks moving, but movement petered out to be replaced with the tooing and froing of Auks and Red-throated Divers. There was a small movement of ducks and waders with c100 each of Wigeon and Teal, a few each of Shoveler, Pintail and Tufted Duck. Waders were represented by small numbers of Dunlin, Sanderling, Knot, Grey Plover, Curlew and a single Bar-tailed Godwit. Also of note 6 Little Gulls flew west.
From the seawatch hide the 1w Glaucous Gull was performing brilliantly for a couple of hours at least, cruising up and down the beach effortlessly using the updraught from the sea wall. Any Herring Gull or Great Black Backed Gulls that got in its way were given short shrift, when David G. through some Squid for the Glaucous Gull a Kittiwake that dared to try and take some was brutally beaten up.

It was happy to take fish guts, Whiting and Ling donated by an angler.

On The Patch, 6 Little Gulls and Mediterranean Gull. At Scotney early afternoon there were no wild geese present, but 100+ Golden Plover and the Long Tailed Duck. Late afternoon driving back along the causeway 2 Great White Egrets were at the south end of the ARC and a Bittern flew over the road from the ARC to Boulderwall.
Posted by Ploddingbirder at 19:35 3 comments: Links to this post

A thoroughly miserable day today rain, rain and more rain with a biting easterly wind, that numbed my fingers so much that I was struggling to press the camera shutter. Despite the weather I was still at the fishing boats at 07.45 where DW was already on site and where we spent most the day. In the south east to east wind, the fishing boats offered very little shelter and we both got soaked and cold. Sea bird numbers were well down on recent days but still enough to keep us out in the rain and cold.
Red-throated Divers: 100+W
Great Crested Grebes: 1,000+ on the sea
Fulmar: 3+W
Gannet: 100+W
Brent Goose: 3E
Common Scoter: 60+W
Shelduck: 1W
Wigeon: 4W
Little Gull: 7+W
Kittiwake: 150+W
Glaucous Gull: 1 1st w on the beach
Auks: 2,000+ W
The 1st w Glaucous Gull appeared at the back of RX446 in the melee of feeding Gulls and spent c1½ hrs showing down to a few feet before apparently moving to The Patch. Shame about the weather and light. 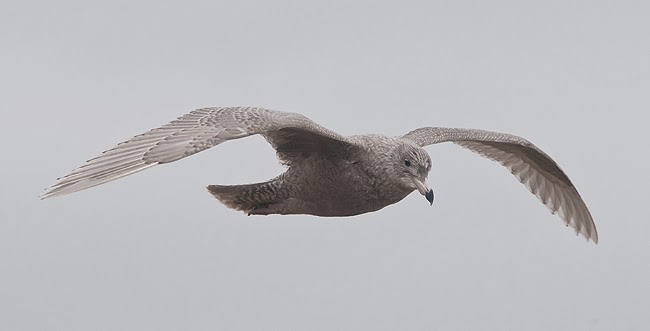 This afternoon at The Patch the 1w Glaucous Gull was not difficult to find as it was the only Gull on the beach. Over The Patch were 5+ Little Gulls and a Mediterranean Gull. The 2 Black-throated Divers could be seen on the New Diggings from the causeway as well as 2 Great White Egrets and a red head Smew at the south end of the ARC.

Posted by Ploddingbirder at 20:30 4 comments: Links to this post

Where do they go?

Another day of heavy showers some prolonged with a cold SW wind. Even so the thought of another Ross's Gull or similar slipping past the fishing boats, gave me a good enough reason to face the weather and stare out to sea.
07.40-10.00 and 14.45-15.45 with DW, this morning we joined by The Joker, Barney and his man servant PT.
Red-throated Diver: 57W
Great Northern Diver: 1W
Fulmar: 8W
Gannet: 179W
Brent Goose: 1W
Common Scoter: 15W
Pintail: 2W
Turnstone: 6+ on beach
Great Skua: 1W
Little Gull: 2W
Kittiwake: c1,000W
Mediterranean Gull: 2W
Auks: c7,000W
Grey Seal: 1
Where do all these Auks, Kittiwakes and Red-throated Divers go or come from? They don't seem to be reported from Samphire Hoe, Rye Bay, Beachy Head, Splash Point, Selsey Bill or even Portland, another birding mystery!
I left early at 10.00 to contact Virgin about my mobile phone which has died after it was drowned yesterday. A few minutes after I left a 1w Glaucous Gull and a 1w Caspian Gull settled on the beach in front of DW. Sods Law strikes again. Oh well no doubt I'll be back at the fishing boats tomorrow rain or shine.
Posted by Ploddingbirder at 19:21 No comments: Links to this post

Damn my lack of photoshop skills! 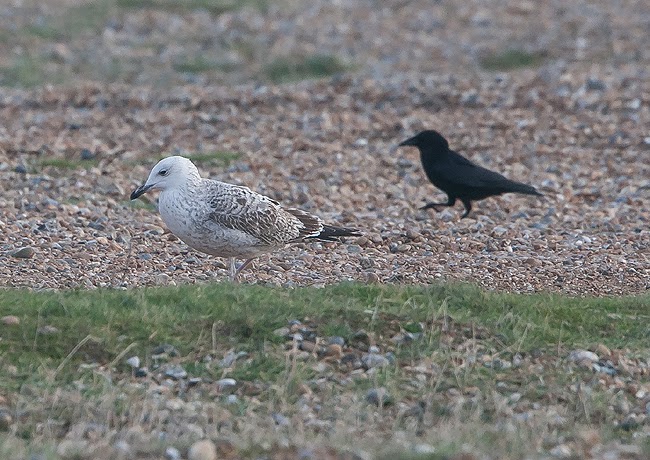 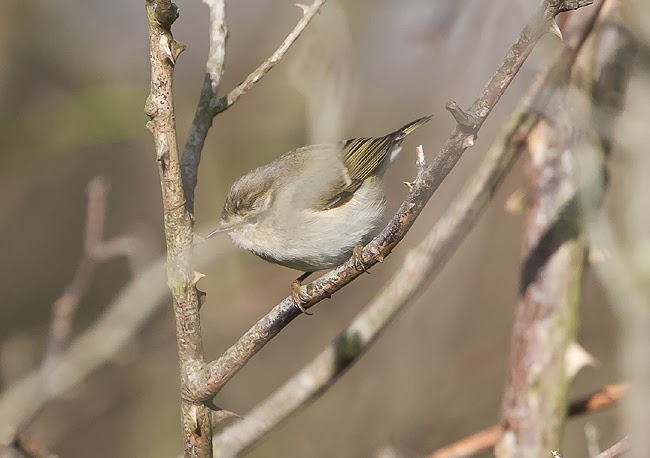 On my 6th attempt I finally managed to get an identifiable shot of the Hume's Leaf Warbler in the trapping area, albeit with a twig across it (I must learn how to remove twigs in photoshop). I found it almost immediately and had it in more or less constant view for half an hour, but very low and deep in the bush and did not manage a single recognisable shot. It then disappeared, I had all but given up hope of ever getting a shot of it when DW arrived, with the aid of his brilliant hearing he quickly relocated it and eventually I managed the above shot. 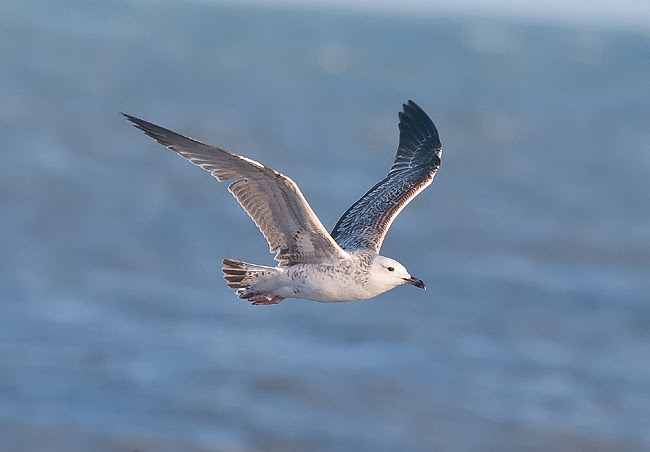 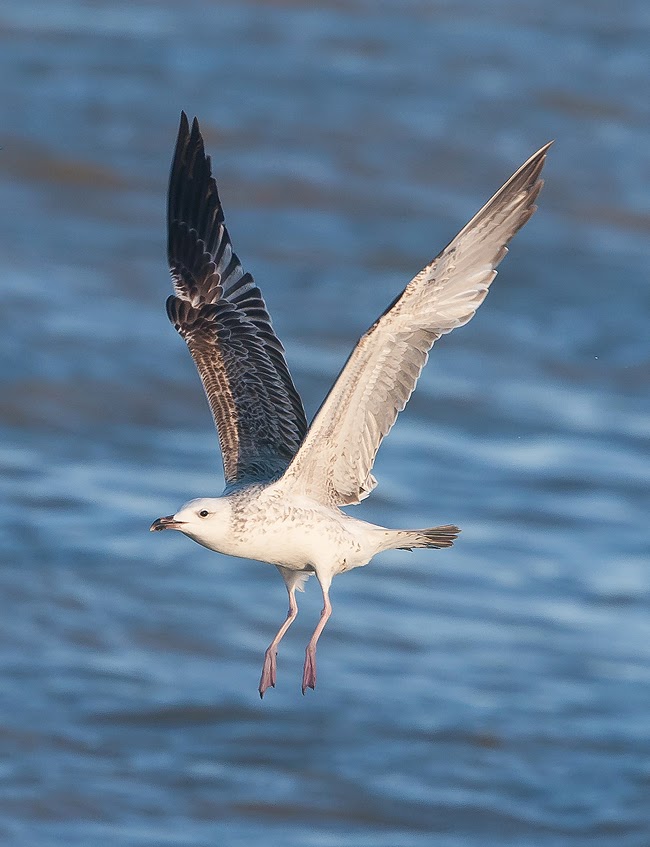 This afternoon while at the fishing boats 2 more 1w Caspian Gulls appeared along with a 2w. DW also located another 2W in the roost. 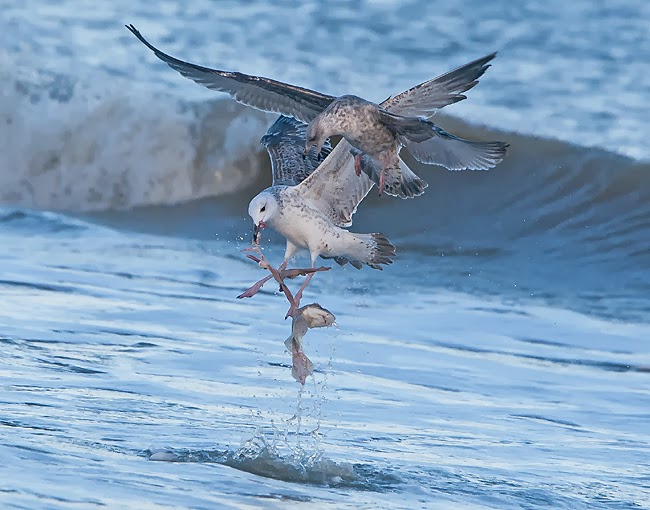 While photographing  the Caspian Gull I dropped my phone on the beach without realising it, when I did it I quickly located it, but not quick enough a wave had just come in over it. Its on the radiator now but I have my doubts! 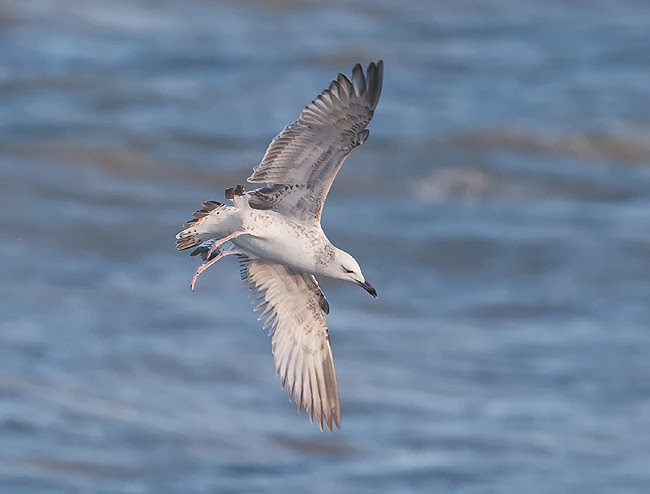 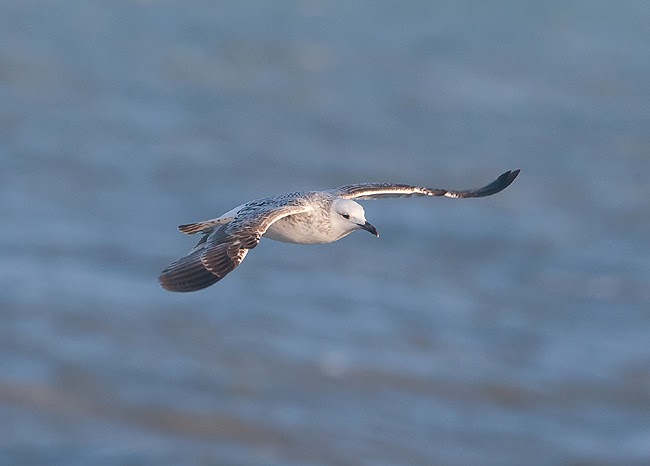 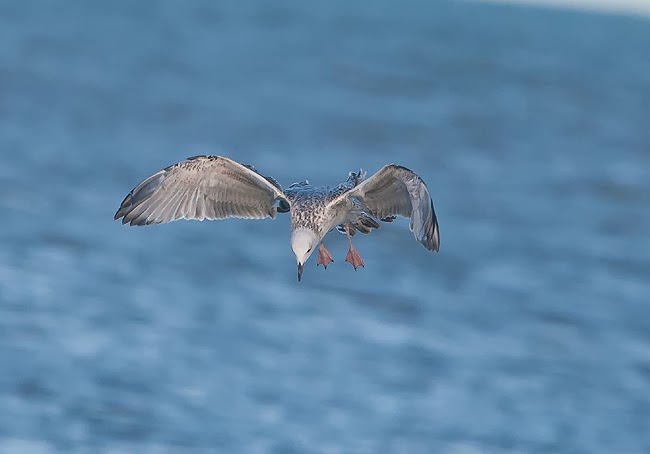 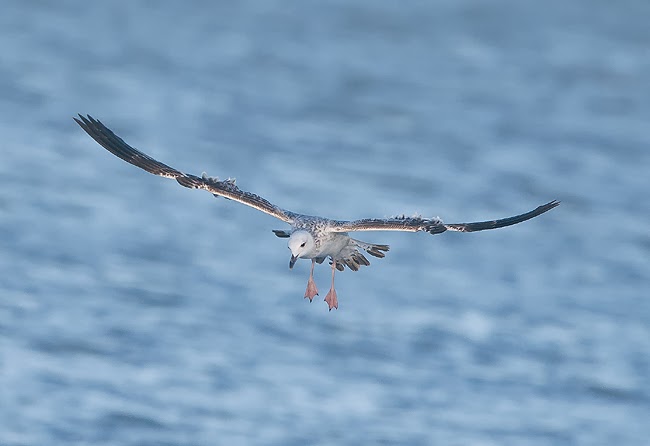 The 2 Black-throated Divers are still on The New Diggings.
Posted by Ploddingbirder at 20:59 No comments: Links to this post

A photograph cannot convey the sheer numbers of birds on the sea and passing!
From the fishing boats with DW till 11.00 when the rain arrived:
Red Throated Diver: c120 most in one flock pushed off the sea by a fishing boat.
Great Crested Grebe: N/C but many could be seen in Hythe Bay.
Fulmar: 2W
Gannet: c200 past and feeding off shore
Cormorant: N/C but c400 feeding
Goldeneye: 2W
Teal: 4W
Avocet: 4W
Turnstone: 6 on beach
Little Gull: 10+W and feeding along the tide line
Kittiwake: c800W and feeding
Mediterranean Gull: 1W
Black Headed Gull:  several 1,000sW
Guillemots: c12,000W and on sea
Razorbill: c2,000W and on sea  working on an approximate ratio of 6 to 1 in favour of Guillemots
Grey Seal: 1
The counts of Auks and Kittiwakes are only estimates as the birds were passing in such numbers it was impossible to count them individually. 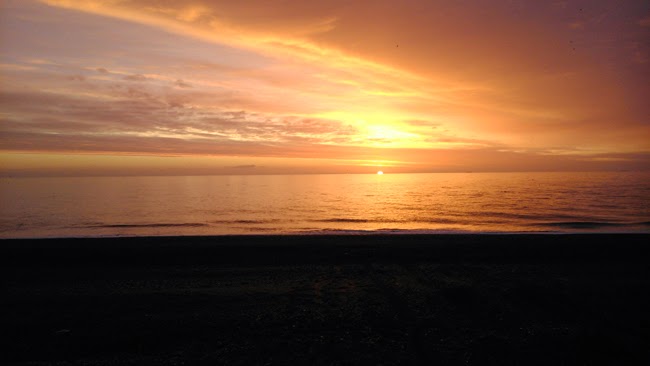 A Stunning sunrise from the fishing boats this morning over a flat calm sea that was smothered in birds. Apart from Divers most birds were either feeding or tooing and froing. 07.40-09.20
Red-throated Diver:  327W  including a flock of 214.
Great Crested Grebe: 1,500+ feeding
Fulmar: 2W
Gannet: c50
Cormorant: 400+
Oystercatcher: 6E
Auks: c5,000 majority of which are Guillemots
Grey Seal: 1 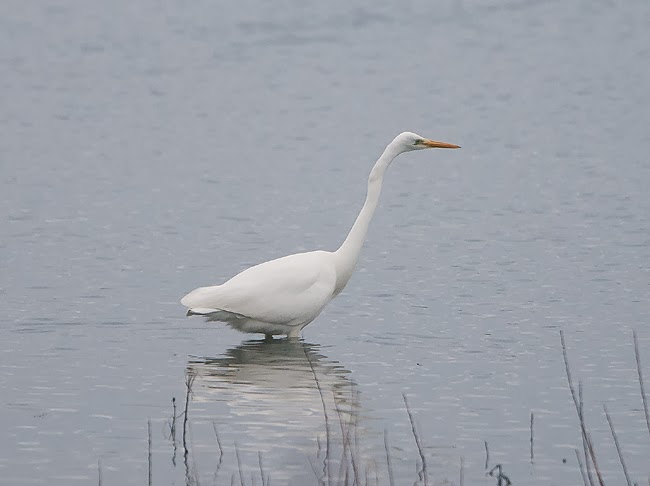 At south end of the ARC the above Great White Egret seems to be a permanent fixture, along with 100s each of Gadwall, Wigeon, Teal, Shoveler, Pochard and Tufted duck also 6 Goldeneye and 3 Red head Smew. 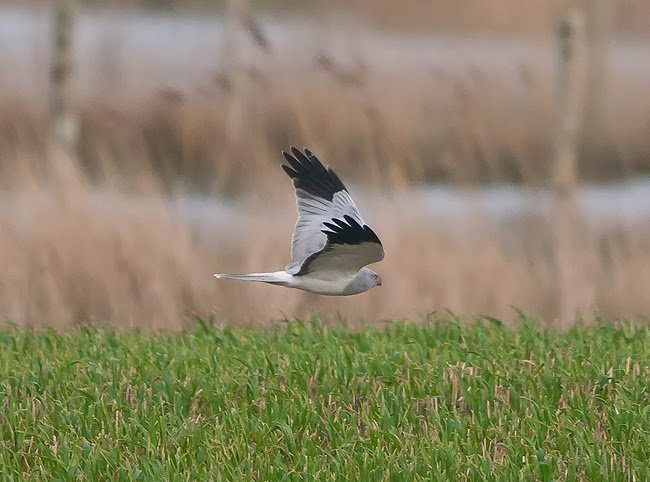 At Dengemarsh a superb male Hen Harrier flew through. A flock of 6 Corn Buntings and 10 Reed Buntings were near the Chicken Sheds. At the bottom of the Gully c20 Meadow Pipits and c30 Linnets. 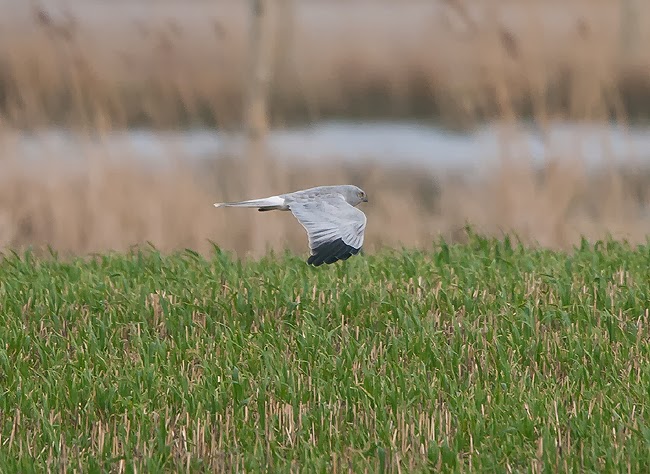 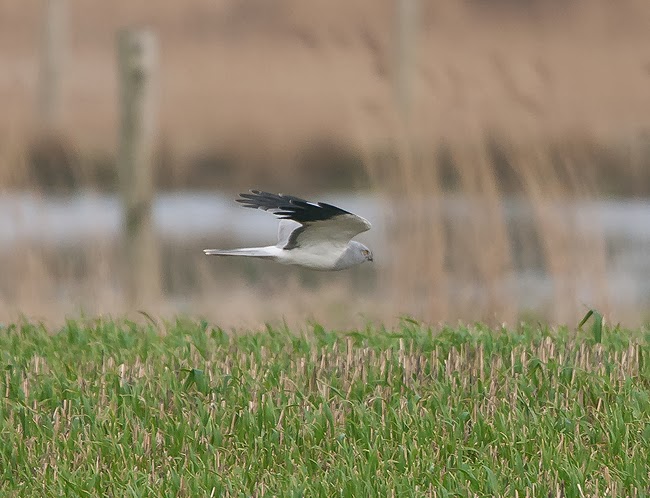 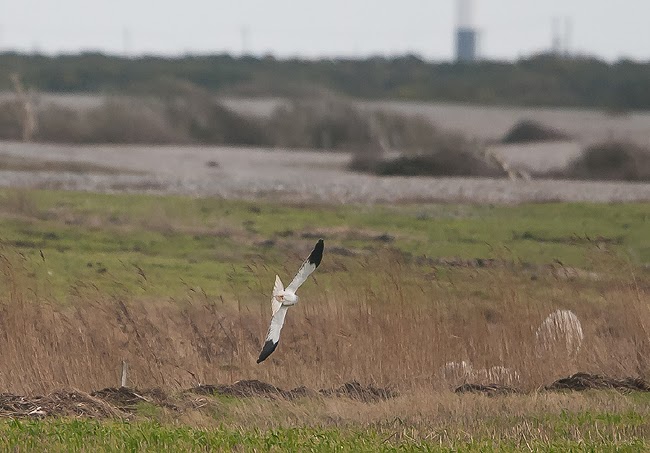 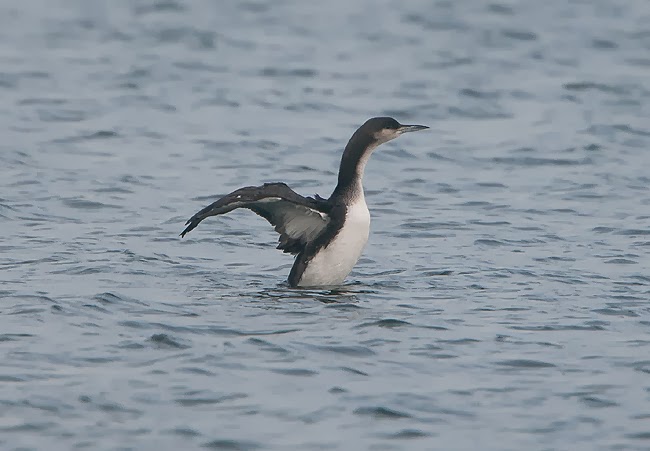 The 2 Black-throated Divers were still on the New Diggings along with a red head Goosander and 2 red head Smew.
The police seem to have a bit of purge on birders parking on the causeway at the moment. Though there seems to be a grey area around the legality of these actions.
I can understand being moved on between 07.30-09.00 and 16.30-17.30 when the wacky racers that work at the power station, are racing up and down the causeway seemingly ignored by the police.  After reading the following taken from the internet I am none the wiser.
Parking on single white lines

If the road has a continuous single white line running along the left side, parking is considered legal but in some cases may be used to discourage parking - though this is subject to localised laws such as no parking enforcement signs or other such prohibited parking markings.
However, in certain cases the single white line represents that there is no pavement , if this is the case then it would be illegal to park on a single white line. Such locations can often be areas where no street lighting is available and the continuous white line is
used to define the edge of the carriageway.

On the ARC a Great White Egret and Little Egret at the south end with c150 Gadwall and c200 Wigeon. From Hanson and the screen hide 8 Smew including 2 drakes the first drakes of the winter, 4 Goldeneye, c 200 Pochard, 2 more Great White Egrets, 2 Marsh Harriers, a Chiffchaff and Cetti's Warbler.
On the new Diggings the 2 Black-throated Divers still present also a red head Smew. While I was on the central causeway trying to get some decent pics of the divers I received a call from DW that an adult Glaucous Gull was in the roost behind the fish hut, when I arrived the Gull was pretty much hidden only getting views of its back, the primaries and occasionally the back of its head, until the flock spooked with some flying off, fortunately the Glaucous Gull settled back down but in a dip out of sight, a short while later they spooked again and by the time I got the camera on the Gull it was overhead and headed away in front the power station.


I went to The Patch to try and relocate the Glaucous Gull but it was not to be. Around The Patch c 2,000 Black headed Gulls, an ad and 1w Little Gull and a Mediterranean Gull.
In local garden a Humming bird Hawk Moth was found showing just how mild it has been.
Posted by Ploddingbirder at 18:57 2 comments: Links to this post