On Walland this morning 32 Bewick Swans(2juvs), 100+ Fieldfare, 2 Marsh Harriers, 1 Common Buzzard and 20+ Tree Sparrows on and around the feeders.
On the beach a Razorbill came ashore and eventually made its way up the beach to settle between my feet out of the wind. Sadly on close inspection the bird does have a lot of oil on its underparts and will probably end up dinner for a Great Black Backed Gull. 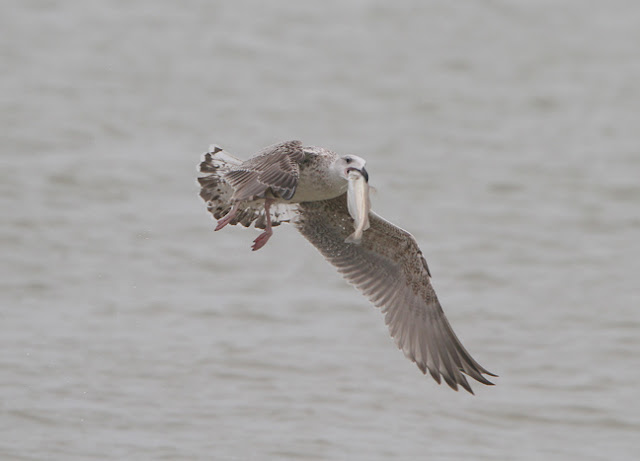 The beach fisherman were catching Whiting and when they through them back the stunned fish were soon picked off by the Gulls.

In c2hrs this morning 2000+ Auks moved SW as did c250 Red Throated Divers, 200 Gannets, 50+ Kittiwakes, 3 Brent Geese, 4 Common Scoter, 2 Bonxies, and 1 Balearic Shearwater. On the sea still several hundred Great Crested Grebes being joined by 100+ Cormorants and many Auks dropping in to feed for a while. The Caspian Gull was again showing well though the Glaucous Gull is sometimes more elusive but showed in the end.
﻿ On the ARC Pit from the causeway 4 red head Smew, 2 Marsh Harriers, 1 Great White Egret and on New Diggings 8 Little Egrets and 2 more Great White Egrets, with all 3 on view at the same time.
Posted by Ploddingbirder at 18:13 No comments: Links to this post 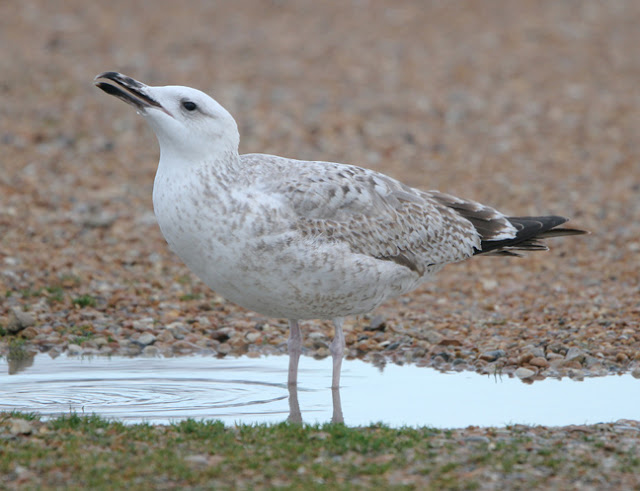 On the beach by the fishing boats the Caspian Gull was posing for the camera in the gloom. At sea 08.45-0945 837 Great Crested Grebes were off shore, good numbers of Auks, Gannets, Kittiwakes and Red Throated Divers were moving up and down the channel, 19 Wigeon flew E and a Merlin came in off. The Glaucous Gull was in the roost. 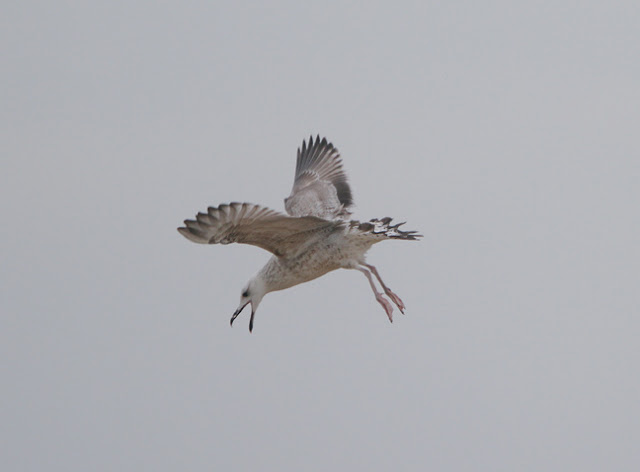 On the ARC from the screen the Long Tailed Duck was at the SE end, 1 Kingfisher, 2 Marsh Harriers, 9 Goldeneye and a Sparrowhawk flew through.

Posted by Ploddingbirder at 21:09 No comments: Links to this post

We finally arrived in Santiago on the evening of 03/12/11,after flying from Mount Pleasant Airport Falkland Islands via Punta Arenas to Santiago. We then headed to our hotel after our luggage had been x-rayed for at least the sixth time that day and they still did not find the knife that was in one of our hand luggage .
Next morning at 04.00 we had breakfast, then our guide for the day picked us up at 04.30 and we headed for Cachagua approx 90 minutes away. We stopped on the way as dawn broke for a comfort break and managed to see a Stiped Woodpecker.
At Cachagua we saw Fire Eyed Diucon, Giant Hummingbird, Rufous Collared Sparrow, Austral Pygmy Owl, Chilean Mockingbird, Common Diuca Finch, Thorn Tailed Rayadito, Plain mantled Tit Spinetail, Southern Lapwing, Chilean Seasde Cinclodes, Chilean swallow, Grassland Yellow finch, Austral Thrush, Austral Negrito, Eared Dove, Hudsonian Whimbrel, American Oystercatcher, Peruvian Pelican, Neotropic Cormormorant, Kelp Gulls and our target species Humboldt Penguin making 9 species of Penguin for the trip. Also had great views of a Sea Otter. 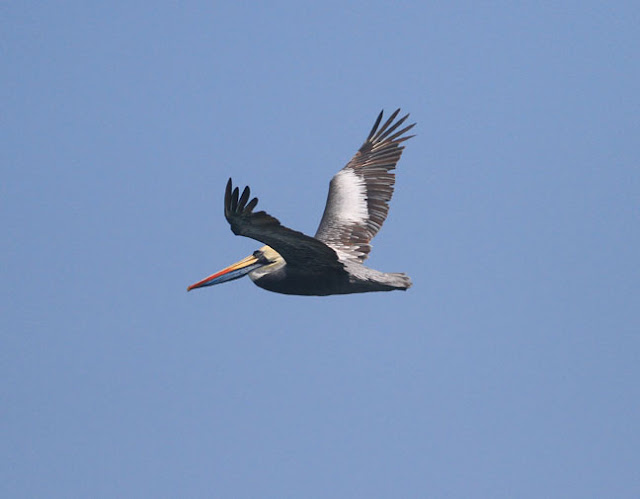 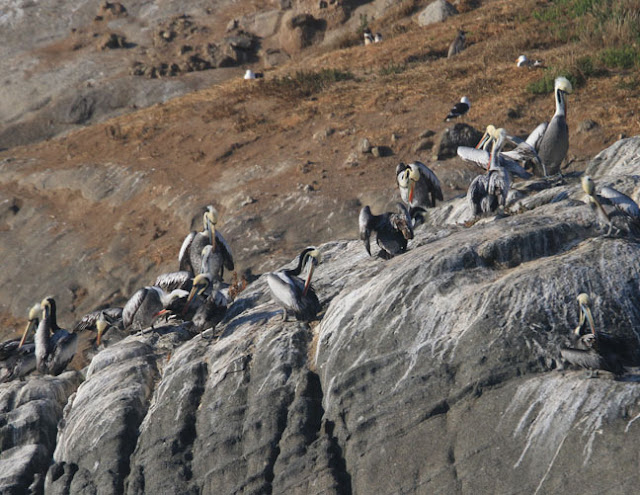 Sadly all to soon we had to leave Cachagua to travel to Valperaiso for our next target species. On the way we stopped at a small marsh for wildfowl and where we saw  a pair of Coscoroba Swans, Chiloe Wigeon, Red Shoveler, Cinnamon Teal, Lake Duck, White Winged Coot, Red Gartered Coot, Red Fronted Coot, White Tufted Grebes, Franklin's Gulls, Speckled Tyrant and very elusive Many Coloured Rush Tyrants.

Just a couple of Kilometres from Valperaiso the local police had shut the road because of a marathon run taking place. Our brilliant driver drove up to the road block and told the policeman we were official photographers as we waved our cameras around and he waved us through. Finally we arrived and glimpsed our last target species Inca Terns. These were joined by Guanay Cormornts, Red Legged Cormorants, Ruddy Turnstones, Peruvian Boobys, Peruvian Pelicans and a few very distant Grey Gulls. 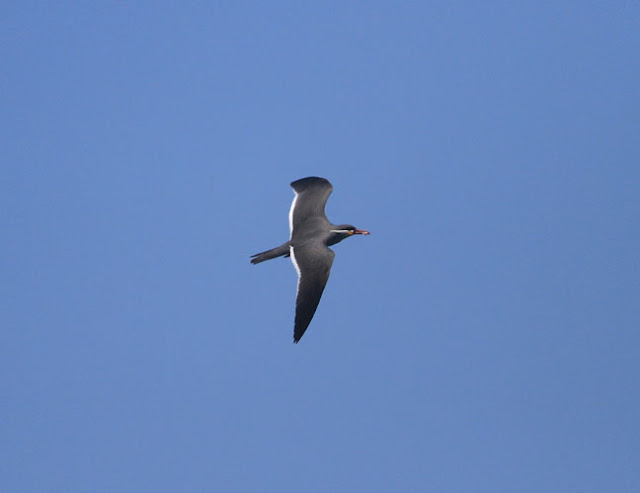 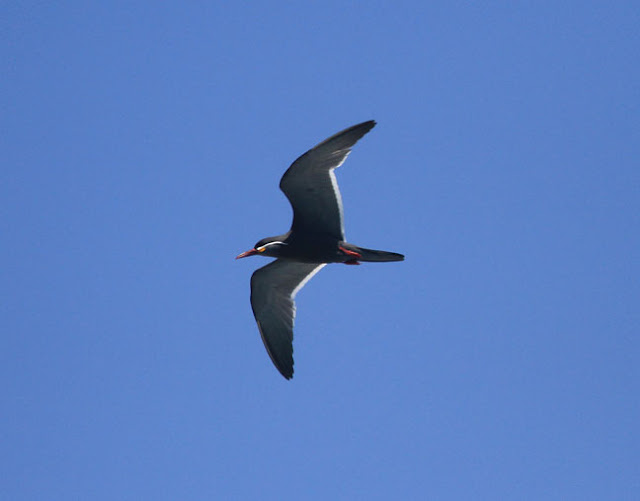 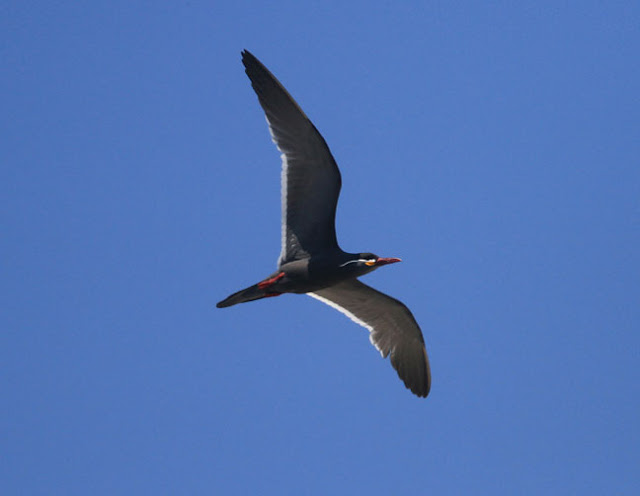 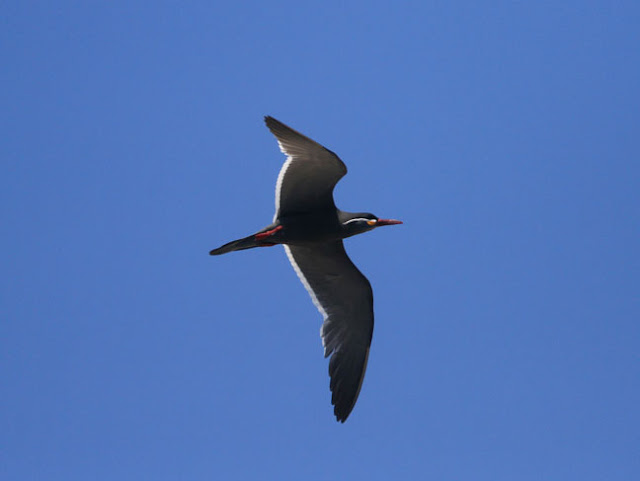 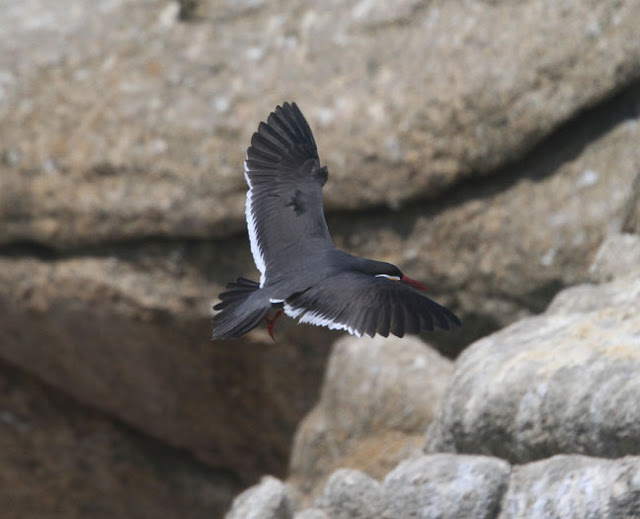 As we had to back at the airport for 15.00 we could only spent ashort time with the Inca Terns. On the way back we a very brief stop at marsh where we had better views of Many Coloured Rush Tyrant and also had good views of Black Skimmers, Franklin's gulls and Southern Lapwings. A superb end to fantastic holiday.


Posted by Ploddingbirder at 21:58 No comments: Links to this post

﻿ In 45minutes sea watching near the fishing boats 647 Auks(mainly Guillemots) flew NE into Hythe Bay along with 107 Red Throated Divers, 200+ Great Crested Grebes, 70+Gannets, 50+Kittiwakes. 1 Red Breasted Merganser flew SW as did 14 Common Scoter.
The 1W Caspian Gull was again showing well on the beach as did the Glaucous Gull.
On the ARC 2 Great White Egrets, 3 Red head Smew at the SE end of the pit 12 Goldeneye, 2+ Marsh Harriers but unable to locate the Long Tailed Duck. The Leucstic Grey Heron was on New Diggings. c20 Tree Sparrows were at Boulderwall Farm.
Possibly a third Great White Egret was on Denge Marsh with a fly over Bittern and 2 Marsh harriers.
On Walland the local hunt was out, the Bewick Swans had increased to 29 only 2 of these were juveniles, 200+ Fieldfare were in the Hawthorn hedges and a Common Buzzard was perched in its usual bushes.
Posted by Ploddingbirder at 19:39 No comments: Links to this post

A Grey Morning at Dunge 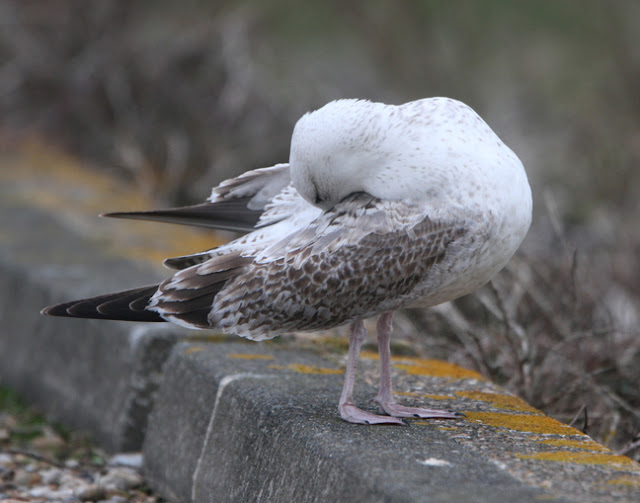 This morning by the road to fishing boats the Caspian Gull posed unlike the Glaucous and Yellow Legged Gull which buried themselves in the middle of the roost.
Off shore 738 Great Crested Grebes and 284 Cormorants were impressive, 112 Red Throated Divers moved SW in an hour as did 48 Common Scoter, 2 Red Breasted Mergansers and 2 Eider also many Auks, while good numbers of Gannets and Kittiwakes were feeding off shore.
At the ARC 3 red head Smew were at the southern end from the causeway and from Hanson 1+ Great White Egret, 2+ Marsh Harriers several hundred Lapwings were on the diminishing islands, 1 Black Tailed Godwit, 10 Dunlin and much increased numbers of Wigeon and Teal.
Posted by Ploddingbirder at 19:41 No comments: Links to this post

Although the King Penguins were the real stars this afternoon the tameness of the beautiful Dolphin Gulls takes some beating. The antics of the Rockhopper Penguins playing in the shallows was a sight to remember forever. 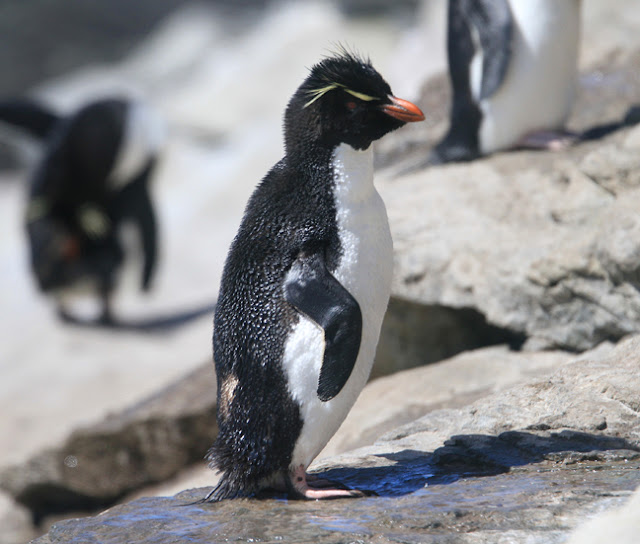 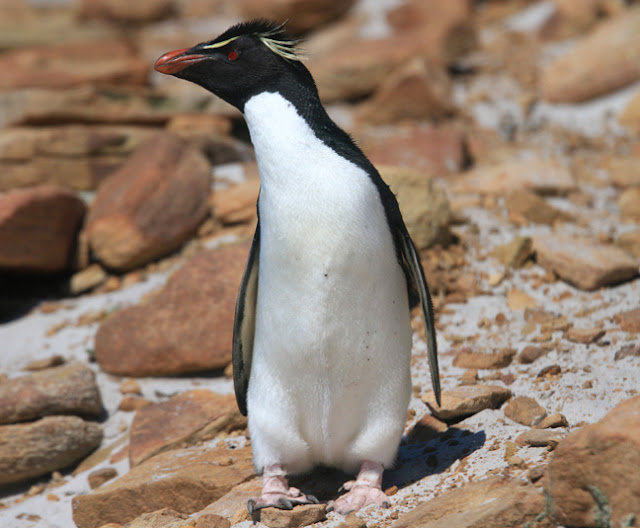 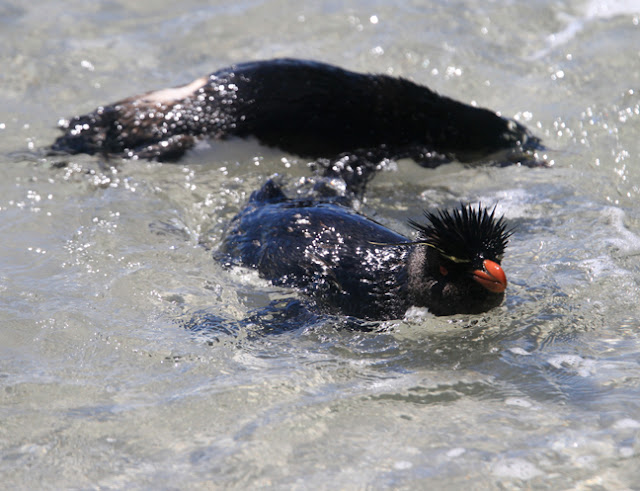 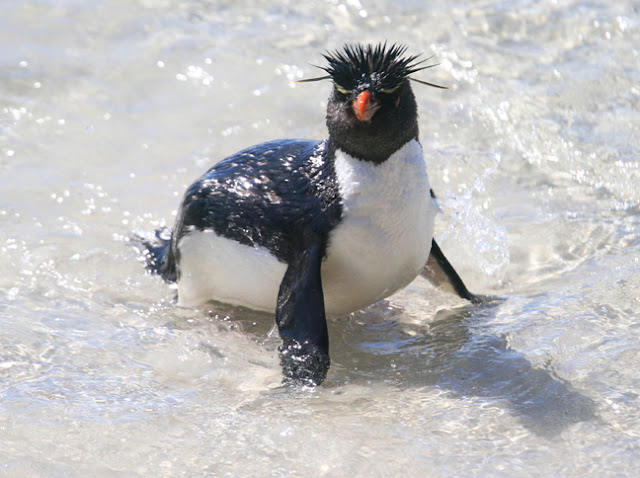 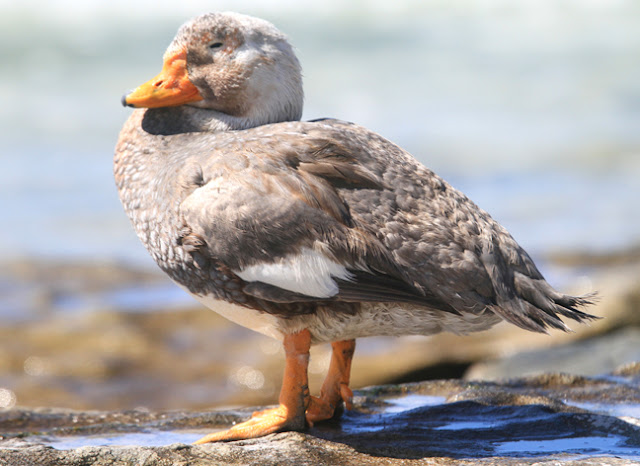 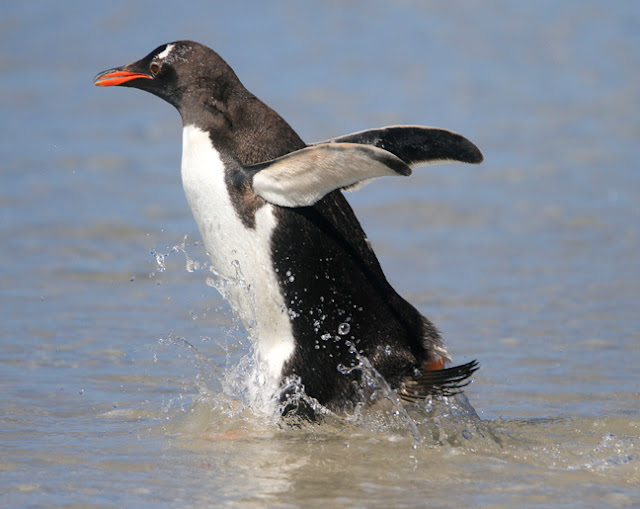 The Gentoo's were coming and going from there fishing expeditions and feeding hungry babies. 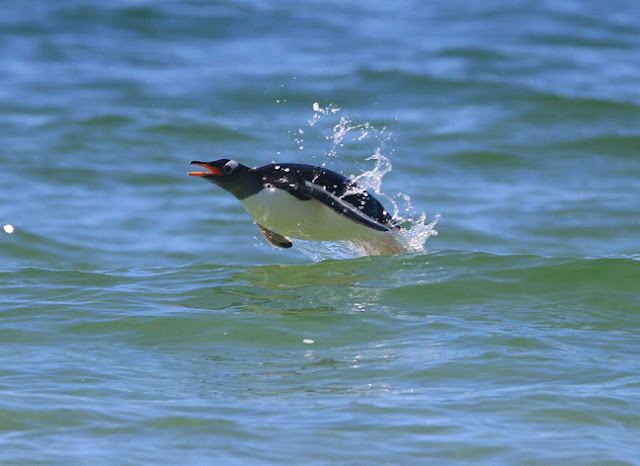 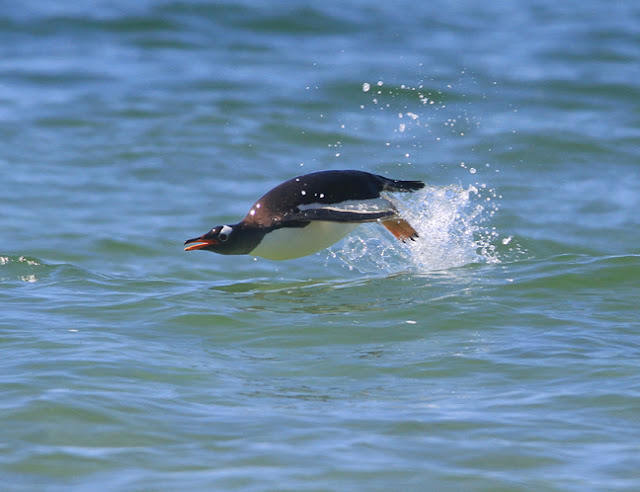 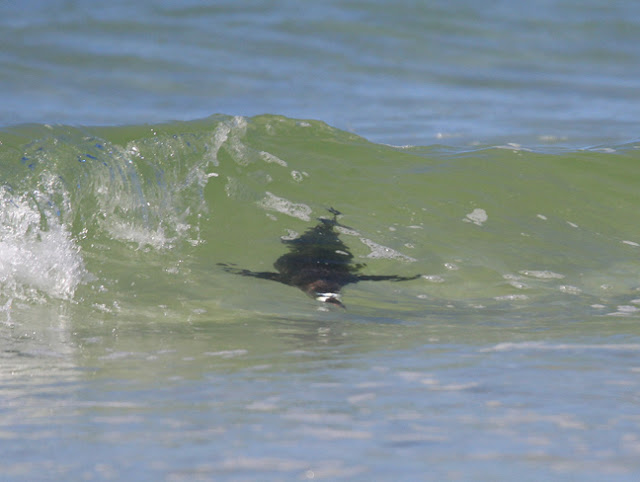 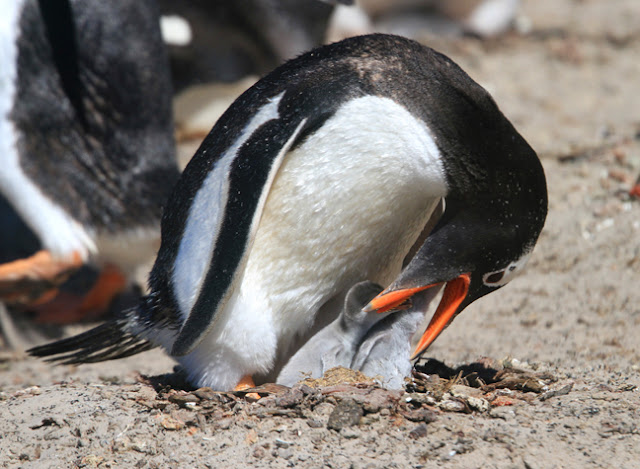 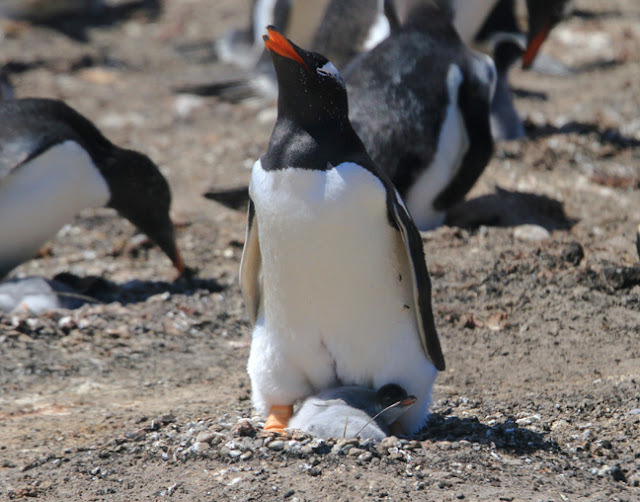 Posted by Ploddingbirder at 20:06 No comments: Links to this post